Let George Do It - Single Episodes 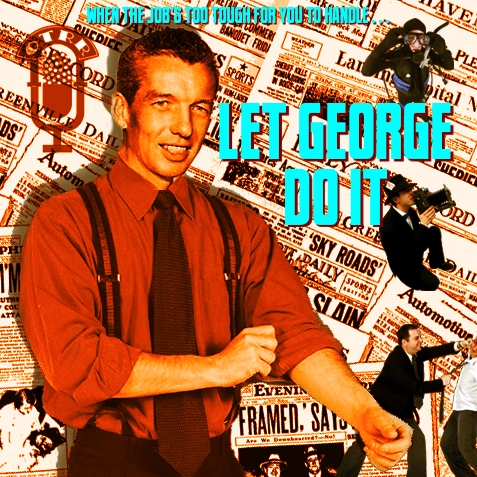 Let George Do It - Single Episodes

LET GEORGE DO IT

Let George Do It was a radio drama series produced by Owen and Pauline Vinson from 1946 to 1954. It starred Bob Bailey as detective-for-hire George Valentine (with Olan Soule stepping into the role in 1954).

Clients came to Valentine's office after reading a newspaper carrying his classified ad:

Personal notice: Danger's my stock in trade. If the job's too tough for you to handle, you've got a job for me. George Valentine.

The few earliest episodes were more sitcom than private eye shows, with a studio audience providing scattered laughter at the not-so-funny scripts. Soon the audience was banished, and George went from stumbling comedic hero to tough guy private eye and the music from wah-wah-wah to suspenseful. Valentine's secretary was Claire Brooks, aka Brooksie (Frances Robinson, Virginia Gregg, Lillian Buyeff). As Valentine made his rounds in search of the bad guys, he usually encountered Brooksie's kid brother, Sonny (Eddie Firestone), Lieutenant Riley (Wally Maher) and elevator man Caleb (Joseph Kearns). For the first few shows, Sonny was George's assistant, but he was soon relegated to an occasional character.

Sponsored by Standard Oil, the program was broadcast on the West Cast Mutual Broadcasting System from October 18, 1946 to September 27, 1954, first on Friday evenings and then on Mondays. In its last season, transcriptions were aired in New York, Wednesdays at 9:30pm, from January 20, 1954 to January 12, 1955.

John Hiestand was the program's announcer. Don Clark directed the scripts by David Victor and Jackson Gillis. The background music was supplied by Eddie Dunstedter, initially with a full orchestra. When television supplanted radio as the country's primary home entertainment, radio budgets got skimpier and skimpier and Dunstedter's orchestra was replaced by an organ.

Reviewer: Cath E - favoritefavoritefavoritefavorite - June 11, 2021
Subject: great audio
This is a great series. I'm a dozen episodes in so far. Audio is great, no ads (really dislike when cigarette ads are kept in). But wow the dialogue is of such an interrupting manner. Characters talk over each other. George constantly dismisses what people are saying cuz he seems to know what he's talking about. The only person he seems to respect and listen to is Brooksy who I like as she seems to have a head on her shoulders!
Reviewer: OTRRArchive - - January 5, 2020
Subject: Files Updated!

OTRR Let George Do It

Thanks very much for sharing.

The change to organ music was unfortunate, but I suppose budget constraints reared their ugly heads even in the "Golden Age."

The character of Brooksie remains the best Girl Friday in all of old time radio and arguably the most useful detective sidekick ever.

The mysteries are usually well-crafted with a nice mix of story lines.

To top it off we have George Valentine (played beautifully by Bob Bailey), a detective that alternates between brilliant deductions worthy of the soft boiled mastere, and delivering some two fisted action to the villains.

The only downside to this eet is that the audio quality is only so-so (most of these 32kbps incomes with a few 64 kbps thrown in.) If you can get past the sound quality, do yourself a favor and enjoy the best detective show you've never heard.
Reviewer: porterville - favoritefavoritefavoritefavoritefavorite - February 8, 2010
Subject: Bob Bailey Did An Excellent Job As George Valentine
The first time I heard "Let George Do It" was as a youngester in the Fall 1948. I enjoyed it then and I am very pleased to again be a listener. The plot was introduced at the beginning of the program and followed through in good fashion by George and his secretary. I did not recognize as a child the "close relationship" between George and Brooksy, which is so apparent as an adult listener. They both make an excellent team, which adds to the pleasure of listening.

Bob Bailey was excellent as Johnny Dollar, but the latter role did not diminish the good work he did as George Valentine.

Uploaded by OTRRArchive on November 20, 2009